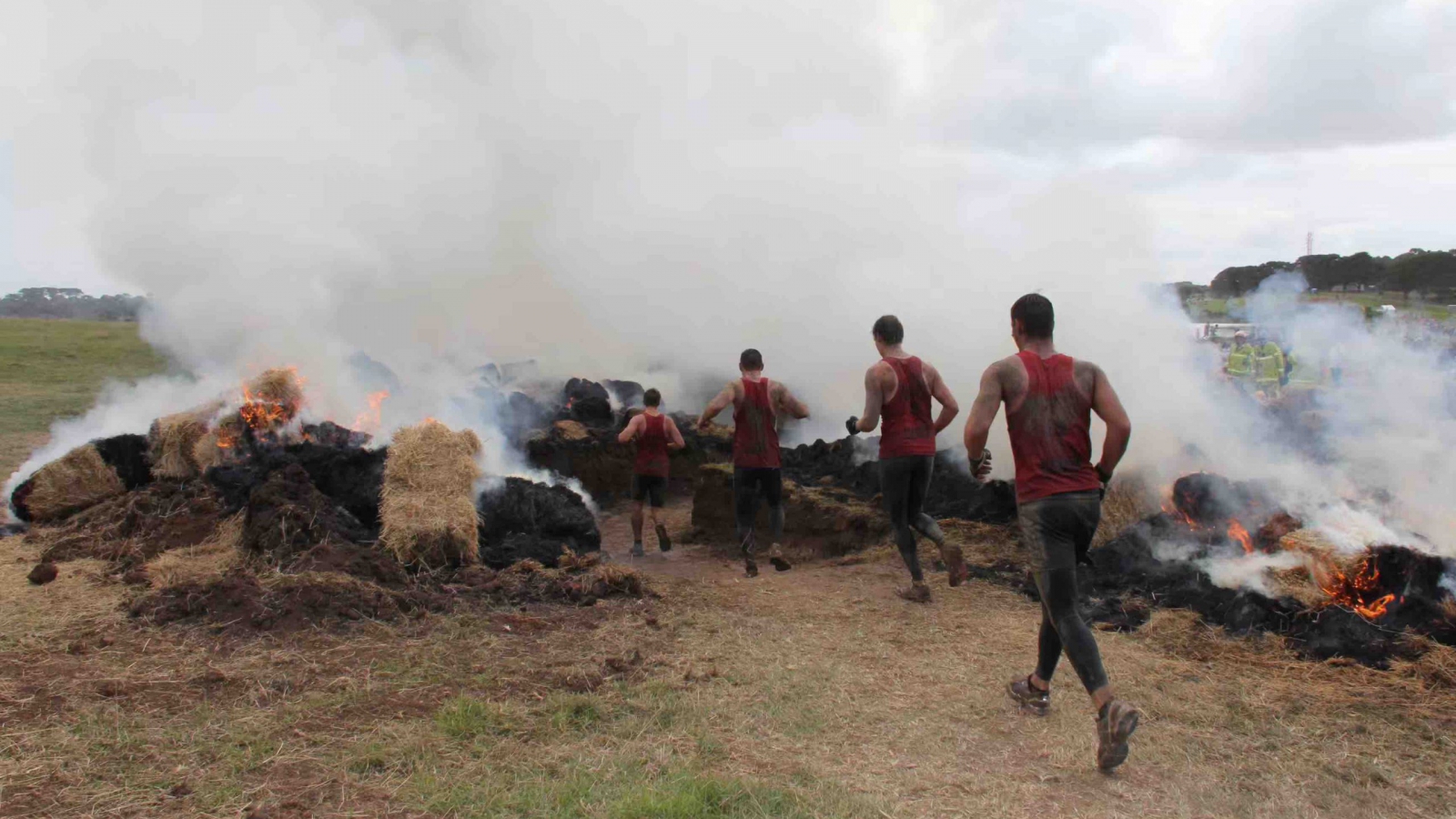 by Author
with no comment
event managementRisk assessmentRisk ManagementTough Mudder

With 21,000 tickets sold and 6 weeks to the event, Tough Mudder was yet to receive approval from local authorities. Here’s how we pulled rabbits out of hats and helped the event go live.

Tough Mudder came to prominence in 2011 in the USA. For anyone with an adventurous nature looking for a challenge, the risky obstacle course designed along the lines of the Special Air Services (SAS) training requirements with equivalent difficulty, was too enticing to resist. The event drew thousands of people and gained immediate popularity. One of the Senior VP’s was an expat Aussie who decided to bring the concept to Victoria, Australia, in 2012.

The immediate challenge was that the event environment in Victoria is significantly more regulated than the USA. And so the very first challenge began: to obtain approval for an event unlike no other before in the state, where thousands of people would be participating.

In the interview below, Steve Goss who is the founder of Sentry Safety Systems, talks about the high levels of risks, whether real or perceived, associated with the event, the due diligence required by local authorities of the organisers to allow Tough Mudder to proceed, and how Sentry helped the event go live in 6 short weeks!

Who were the approving or permissioning organisations involved?

“In Victoria, any major event such as this one requires approvals from the Police and Ambulance as well as the Local Government, who want assurance that event organisers have considered all the risks associated, and that they have in place correct control environments, before allowing any event to proceed.

For example, the Building Act & Regulations allow councils to insist that event organisers obtain a Place Of Public Entertainment permit, referred to as a POPE. The POPE process specifies the safety of attendees and participants through ensuring that enough facilities have been provided, that the obstacles are structurally sound, and that emergency arrangements are suitable should they be required.

The Occupational Health & Safety Act and Regulations set a high standard on the health and wellbeing of participants, attendees, and personnel so that they are not exposed to an unacceptable level of risk to their safety.

This then leads to the question: At what stage are participant injuries in high risk events deemed to be acceptable? This is a complex question to answer.

People will voluntarily place themselves at risk through activities they knowingly enter, providing they are suitably warned of the likely hazards, risks and consequences. This is typically done through the signing of a waiver of liability or similar. Now it may be acceptable elsewhere, and to a degree here in Australia, but that does not absolve an event organiser from applying rigour to ensure those risks are reduced to a level that could be deemed to be satisfactory.”

What did the Tough Mudder group struggle with the most in obtaining approval for their event?

“Firstly, Tough Mudder engaged Event Operations Group in Australia to build the course, while trying to deal with the approval process remotely from the USA. Emails don’t tell the full story and when you have cautious regulatory authorities at this end, they will typically opt for a more conservative approach. Zoom wasn’t about back then!

On the arrival of Tough Mudder to these fair shores, there was no previous history. The website displayed graphics involving flames, water, heat and electricity which lead to the perception that it was high risk. The risk planning documents had been prepared in the US and not relevant to addressing concerns here in Australia.

Australians were quick to jump on the concept and only six weeks out from the event, Tough Mudder had sold over 21,000 tickets to its first Australian event over 2 days, 15,000 were for the Saturday. This was 50% larger than they had encountered anywhere else in the world at that stage. And they hadn’t yet received approval!”

What was particularly challenging about the Tough Mudder event in Phillip Island in 2012?

“It was the first of many Tough Mudder events in Australia so a lot was unknown about how it would unfold here.

The obstacles were designed and built to the maximum crowd size they’d experienced previously which meant they were completely undersized for the numbers here in Victoria, which slowed progress for participants. There was a potential for hypothermia because Phillip Island is a cold place for most of the year. Participants would potentially be wet, stationary and shivering, losing body heat fast.”

What were the top risks associated with the event that made it difficult to obtain the required approvals?

“Approving authorities including emergency services and local council decided the event was too high a risk and that the risks had not been well thought through.

The location was Phillip Island’s Grand Prix circuit which was only ever previously used as a motor sport and tourism destination. This was a 20+ km course across mostly farmland and rural settings so planning for emergency access/egress was a challenge.

This event was proffered shortly after the disastrous running of the WA Kimberley Ultra Marathon in 2011 where that powerhouse of a woman Turia Pitt, was unfortunately seriously burned, and the association with fire was on everyone’s radar. Therefore, timing for approval was not the best as the rural setting also had a wildfire risk.

The plans provided in the lead up were deficient in many areas, particularly the emergency response planning, so the event was not approved. Tough Mudder had 21,000 people looking forward to an event which was at that point, not allowed to go ahead.”

How did Sentry help turn the initial No into a Yes with approval from local authorities?

“Having never heard of Tough Mudder, I received a phone call from Anthony McKechnie from the Event Ops team about six weeks out from the date of the event, saying “these guys may need your help.”

We’d had dealings with major events over the previous ten years with the MotoGP at Phillip Island, and had worked closely with Ambulance Victoria and Bass Coast Shire Council in planning safety, risk and emergency management. We were able to address the concerns of the local approving authorities, act independently from the organiser and provide them the confidence and the required level of assurance, so things moved fast from this point.

The Tough Mudder (TM) USA team handed responsibility for the planning process to Sentry and the rest is history, so they say. It was the initial intention of TM USA to take the process applied by Sentry and utilise it elsewhere across Australia, but they soon realised that each state and local government have their own specific requirements. TM USA and then TM AU continued to engage Sentry to plan and provide safety resources to every Tough Mudder event that has been held in Australia and New Zealand to date – about 37 in all up until late 2019, when COVID 19 prevented any Tough Mudder event since.

We have enjoyed the Tough Mudder event experience immensely. The needs of approving authorities change every year, so we stay across these changes and apply risk planning strategies as required, continually improving the process from event to event.”

“The Tough Mudder experience and the systems put in place to safely manage those events over time, were the initial impetus for Sentry to develop its event safety and compliance L.E.V.8® Portal. Having to connect the dots between contractor, staff, participant and spectator safety across diverse and often green field locations, drove the need for the one stop shop compliance portal that is L.E.V.8®

L.E.V.8® is a cloud-based portal used as a decision support tool that streamlines the process of planning for risk and safety by providing a one stop shop which contains, manages and distributes all the information required to the right stakeholders.

The system is an accumulation of twenty years of major event experience coupled with event vigour, and tailor made for risk management planning rather than an off-the-shelf product being shoe-horned into the event space. People can request a free trial and we’ll actively help them during the trial stage so that they clearly understand the value to their organisation.”

Request a demo of the L.E.V.8® Compliance Management Portal

Book a free 30 minute chat about any of the challenges you may be facing in getting your event approved or back up and running – we’re here to help.

Book an appointment here to discuss your needs.

Watch the video interview with Steve below: